Jeff Williams firmly believes his technology company has cracked the code of the central, systemic challenge facing K-12 education in America. “It’s all about showing up,” he says.

Williams—Founder and CEO of School Innovations & Achievement (SI&A), a national technology and services company, further states, “In the early years of learning, not showing up was associated with lower academic performance, especially in reading and math. Nationally, one in every 10 kindergartners and 1st graders is chronically absent, which is defined as missing more than 10 percent of the school year. That’s 18 days per school year—but because it’s ‘just’ a couple of days a month, it sometimes goes unnoticed.”

In response to, and in anticipation of a worsening crisis, Williams’s company created the Achievement Initiative with Attendance2Attendance (A2A) as its product-and-services foundation. A2A is designed to address absences as they happen. “Our challenges are in real time. If you find yourself in quicksand, you don’t want to spend a lot of time wondering how you got there. You want to find a solution—and that’s what we’ve done, one that works 100 percent of the time.” 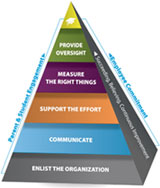 To connect schools with parents and students, providing district leadership with information that’s current, compelling, and usable the company implemented The Achievement Initiative as a strategy. Williams says the Achievement Initiative programs are designed to engage parents and school principals in the battle to keep children in the classroom and on a productive course to their future.

A2A, for instance, has already been deployed with remarkable success: to date, it has tracked more than 1.5 million schoolchildren’s records of attendance and absences at more than 1,500 school sites.

“If we’re unwilling to increase the number of school days in a year—or the average number of hours in a school day—then we have to focus on the attendance crisis,” he says. “That’s what we have to fix. Now.”

“The loss of learning time in U.S. schools is an epidemic for which some well-meaning people are prescribing the wrong medication,” Williams says. Though his firm specializes in creating and servicing technology for the education sector, Williams believes technology alone isn’t the answer.

“You need the right software, but also proper execution, diligent across-the-board follow-through and rigorous outcome measurement,” he says. “After all, if you don’t measure how you’re doing, how can you know if something needs to improve?”

One set of measurements that alarms Williams and company is America’s stand in reading, math and science competency compared to other countries.

In an era of devastating fiscal cutbacks, Williams is concerned that school staffs are taking on ever-bulkier administrative workloads while also being expected to improve learning results. “We want teachers and administrators to do what they do best, which is to engage with students and parents,” Williams states. “You can’t create a culture of achievement, which is one of our mantras here, if you’re trying to accomplish too much with too few resources.” To illustrate the concept, SI&A created a pyramid that shows as its foundation the need to enlist the organization— the school site or district’s employees and the parents—and then, as one ascends the structure, the need to communicate, support the effort, measure the right things and, ultimately, to provide oversight.

Attention2Attendance is bolt-on software for any school district School Information System (SIS) that automates attendance interventions from the cloud. A web-based application, it saves time with SI&A’s exclusive data robot capabilities to securely retrieve, validate, and analyze data. The SI&A team then turns that data into actionable reports, which identify key absenteeism patterns, highlighting areas with the greatest attendance concerns. The Achievement Initiative builds on the momentum already started with the A2A Base Program, finding solutions in district data to direct targeted, research-based communication campaigns. This powerful tool removes the need for district and school site infrastructures to support aggregating complex student data, consolidating lists, while maintaining servers and Internet connections.
“In short, it eliminates failure points between these processes,” Cook says.

SI&A uses a rigorous process of checks and balances to identify invalid information, questionable data entries, erroneous codes and unusual data variances within the district. As often as each week, district attendance information is reviewed by three different independent teams and automated data routines to ensure accuracy—by checking data constancy, unexplained anomalies and comparative analysis to district historical trends. If any anomalies are identified— home language is missing, guardian information is missing, address is missing — data alerts are issued so that the schools can update their Student Information System.

Williams says that when certain data get aggregated, they can hide worrisome issues and useful, actionable facts. “A 96 percent attendance rate can co-exist with high absence rates in Kindergarten and first grade. But absence rates change significantly in transition years and tend to keep climbing.”

Cook, who has worked alongside Williams since the company’s founding, is a respected industry expert in line management operations, individual and team coaching, and organizational alignment to meet critical goals. She served as the general manager for AT&T Business Systems, and as a vice president and general manager at ARC, Inc. Immediately prior to joining SI&A, she owned a successful consulting business that provided CEO coaching, executive and management training, organizational and managerial effectiveness, and organizational design. Her clients included high-growth companies and companies in transition. She holds a B.A. in Psychology from the University of Missouri at Kansas City. Williams and Cook take a great deal of pride in the corporate culture at SI&A: it’s easy going in terms of two-way communication among management and line employees, but vigorously hard working. “I think what makes this company so different from others and what I’ve worked for is the genuine spirit of collaboration,” says Grace Spencer, Product Management Vice President. “We have a ‘flat’ organization: anyone can talk to anyone else. That kind of communication prevents messages from getting filtered and misinterpreted—and it allows our people who are out in the field to remind us what our clients’ concerns are.”

Right now, those concerns are invariably positive for A2A—a product that Williams says, without hyperbole, “works 100 percent of the time. That’s not a boast; it’s a documented fact.” He smiles. “But it’s also worth boasting about, isn’t it?”
- Lane Adams
August 11, 2017